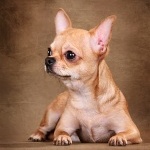 г.Москва
Настроение : аууууу!!!
[Вы должны быть зарегистрированы и подключены, чтобы видеть эту ссылку]
To: to FCI Mexico
As of September 2010, the breed standard for the Chihuahua changed from a small open fontanel was acceptable to it now being a serious and disqualifying fault.

It's no secret that it has always been a desirable characteristic that the breed had a round applelike head, and therefore an open fontanel the size of the yolk of a little finger was acceptable. In the previous standard this was acceptable.
The new breed standard has now been changed so that it specifies that this small open fontanel is not desired and therefore must be considered as a serious and disqualifying error.
Within the breed of Chihuahua there have not previously been any restrictions when it comes to breeding. This in part shows that the Chihuahua in general is a fairly healthy breed which of course is desirable for breeders across the world.
Regarding an open fontanel, it is a minority of today live-born puppies which is without an open fontanel. An open fontanel can, and should be assimilated with the "soft spot" in a newborn human baby. In this newborn baby the "soft spot" closes over time as in the case with most Chihuahuas.
The problem with this current, breed standard is that we canґt change the breed over day, and therefore we must face in the future as breeders and exhibitors, risking our breeding animals indiscriminately will be disqualified by certified judges without detailed knowledge of the breed and its history, apart from the written standard.

A disqualification on the basis of a historically, desirable characteristics of the breed, could have fatal consequences for many breeders, otherwise extremely fine breeding all around Europe. Even our most winning dogs and exhibitors are at the risk of being affected by the likely change in market, when they may be in possession of a puppy with a small open fontanel.
There is no scientific documentation that indicates that an open fontanel equals health problems.
Disorders like "wry mouth" (uneven jaw) and Patella luxation is looked upon with seriousness and caution, and restrictions regarding this are welcomed.

Earlier this year, a Danish judge judging Chihuahuas in The Netherland disqualified 27 dogs out of 70 entries - here among Chihuahuas because of an open fontanel! (Champions was among the disqualified)
At the Danish Toydog Specialty a breed specialist judge gave very law awards from Baby class and up because of a open fontanel!
It is a worry among us exhibitors and breeders that this is what we are facing within the next couple of years, while we work on meeting current and future requirements 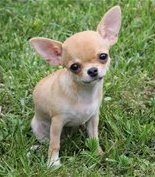